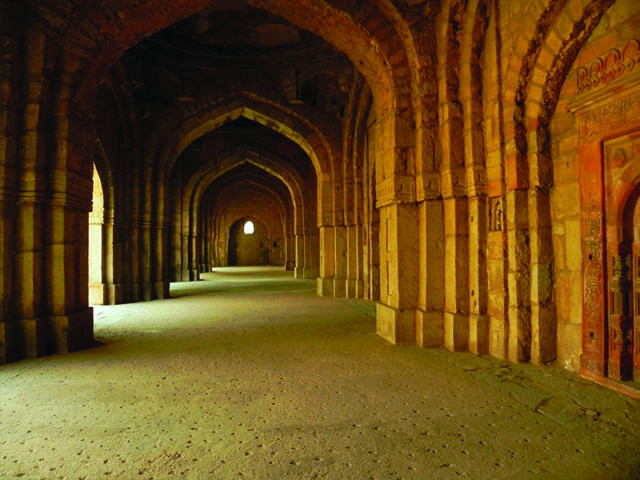 Built-in 1528, the location of this place is the Archaeological Village complex in Mehrauli, Delhi, India. One monument is a mosque and the other monument is the tomb of two people by the names of Jamali and Kamali.

The reason behind the name:

“Jamali” was the alias of Shaikh Jamali Kamboh, an extraordinary and highly respectable Sufi saint who lived during the pre-Mughal rule. Kamali, on the other hand, alone was an unknown person, but he was associated with “Jamali”. So, the tomb and mosque in the collaboration have been named together as “Jamali Kamali” since both people after their death were buried next to each other.

Construction  of tomb and mosque:

The monument is constructed in red sandstone and is perched in an enclosed garden. A large courtyard bulge to the main prayer hall, barrel with five high arches, but only the arch in the center is topped with a dome. All the arches are also delightfully adorned. The walls and alcoves of the mosque are engraved with verses of the Koran. Neighboring to the mosque is the tomb, which is a procumbent structure adorned with red and blue paint and engraving from the Koran and verses from Jamali’s poems.

Interior Decor of the Tomb:

The interior part of the Tomb is a work of art in itself. Stepping inside the tomb is actually like stepping into a precious jewel box. The blushing and elementary looking square tomb without any dome built inside is exquisitely embellished from the inside. Two marble graves indoor to the tomb belong to Jamali and Kamali and marbled at the dazzling stucco work, obscure calligraphy creating a sense of reverence for the exquisite interior décor.

BookBySlot provides booking for these hotels:

If you are visiting near the airport- Hotel Qutub Residency, Adchini which is about 8.8 km away from the tourist destination can be booked.

Hotel The Madison GK-I and Pamposh Enclave, Block E, Greater Kailash II, New Delhi which is about 12.2 km away can be booked on an hourly basis or day wise.

Hotel Zion(Safdarjung enclave) which is about 6.4 km away via Afrika Ave.

Wishing you a happy stay!