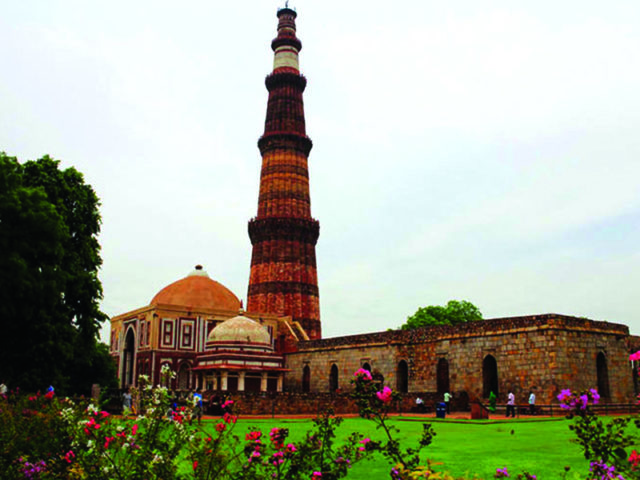 This tallest marvel of the world is a must-visit place in Delhi. The Delhi metro card has got an image of Qutub- Minar as this red stone tower is an inspiring piece of architecture coming from the Mughal Empire. It gives an insight into the beautiful Kufic calligraphy as each floor has a unique pattern. The 72.5-meter tower that has been marked as a UNESCO world heritage site, can be witnessed from the plane as you fly above Delhi.

Qutb-ud-din Aibak the Sultan of the 12th Century laid the foundation of Minar in 1199 CE for the use of the mu’azzin (crier) to give calls for prayer. There are various reasons cited for the construction of the Minar. The most widely accepted reasons are that it was built in order to celebrate the advent of Muslim dominance in Delhi (and India), the first ruler of Delhi sultanate region, Qutb-ud-din Aibak, encouraged by the Minaret of Jam in Afghanistan and desiring to transcend it. The Minar was completely built by his successor Shamsu’d-Din Iltutmish.

The Qutab Minar and the Quwwat ul Islam Mosque both are built on the ruins of 27 (demolished) Hindu and Jain temples, that were built by the Tomars and the Chauhan, who is considered as the last Hindu rulers of Delhi.

As the Qutab Minar was a tower of the barn door height, so, quite a few times it got struck by thunder and lightning and so, it had to be repaired time and again. According to the inscriptions on the surface of Minar, it is said that Minar was repaired restored by Emperor Feroze Shah Tughlaq (AD 1351-88), Emperor Sikandar Lodi (AD 1489-1517) and Major R.Smith in 1829.

It is open on all the days in the week from 6 am in the morning to 6 pm in the evening.

Visiting this monument creates a patriotic sense of vision among the individuals and visiting this historical statue is the best way that one can explore a nation’s history.

Qutub Minar symbolizes the victory and firmness of Islam as well as served earlier to call people for prayer at Quwwat-ul-Islam mosque. It is the most mesmeric tourist destination in Delhi and utmost visited by the kids, children and school students in their summer or winter vacations. Treebo Conclave Riviera, Kailash Colony, and Treebo Royce,  New Friends Colony are one of the most preferred hotels that are available for you near Qutub Minar, for your easy and happy stay.

Facilities that Book By Slot provides to travelers who visit Qutab Minar:

Stay tuned for exciting discounts on pocket-friendly hotel booking services of bookbyslots.com. If you are planning a trip to New Delhi then you can book hotels on slots/ hourly basis for 4/8/11 hours through BookBySlot in south Delhi and travelers can save on hotel booking tariffs by paying up to 50% less. Some of the best hotel bookings that can be made in south Delhi with BookBySlot with, Mapple Express, New Delhi, Qutab Residency, Adichini, the hotel that is very close to Qutub Minar and can be booked for full day or slots of four or eight or eleven hours. We offer certain amazing choices as our tie-ups are with one of the finest hotels like The Madison, Greater Kailash, The allure GK,  La cadre, Kailash Colony.