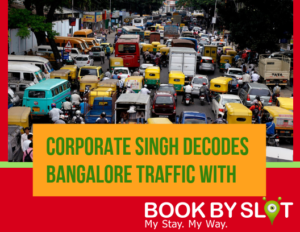 Budget premium hotels near Bangalore airport is one of the things that is categorized as the impossible in the list of great adventures. And of course hourly booking of premium hotels next to Bangalore airport is something which can’t be imagined at all and so your very own Corporate Singh had never expected a slot wise luxury stay in Bangalore. And here goes the story, a longtime love story with Bangalore, a longtime hate story with the city’s traffic.

Being a corporate guy one cannot stay away from becoming a part of Namma Bengaluru. It is the end place of all the corporate solutions and is known as the Silicon Valley of India. Abiding by the fact that it is the hub of most of the corporate industries it has been my ritual to visit here every once a while.

My story with Bengaluru is quite long. I have known it since the starting of my corporate career. All these years have been a great experience with loads of rain and loads of traffic. It’s like it rains cars and buses here in Bangalore. I highlight this brutal face of the beautiful city more for it is the major unwanted spice in the stories of my corporate travels. Rest, Bangalore surely is one of the most beautiful cities in India, thanks to BookBySlot, it has become more beautiful to me now.

Coming here gives a nostalgic experience and going back takes the toil of being in traffic for a couple of hours are a normal thing. You have to push about 3-4 hours before you have to reach Kempegowda International Airport. I cannot tell exactly but I think I have wasted around a month of time waiting in traffic on the way to the airport only on my corporate travels keeping the travels during my college years aside.

Bangalore is the place where I got to know that in order to tell the time to reach places you need to add the waiting (traffic) time too. Funny as it sounds, it is more like a fearful thing to hear. And yes, it is. An absolute horror especially when you are on a corporate travel routine for most of your time will be gone in the traffic.

Bangalore is so crowded with vehicles that it becomes very difficult to have the traffic going. The traffic never has a flow it always has a caterpillar motion here. There are many places which are so famous that nobody wants to cross, since, they are famous for all the wrong reasons of getting stuck and do not move at all. But being the important parts of this city people cannot avoid going there and waste their valuable time. Booking a hotel room before catching a flight while on corporate travel plans inside the Bangalore city becomes an imaginary thing!

Certain places like Silk Board have become so infamous that any Bangalorean fears it more than the wildest imagination for fear. Also termed as country’s biggest parking lot because of its nearly halted traffic flow if you have to cross it to catch a flight from the Bangalore airport, better brace yourself with an extra 2 hours in the pocket. Silk Board is a time eater and if you are on the clock, loud laughs and great sympathy! Jammed at every hour and especially when you are getting late, hotel rooms inside Bangalore city becomes vague when you got to cross all these Herculean obstructions to reach Bangalore airport.

Marathalli is another place which drives horrors across my body and will. The bare thought of the prodigal bridge and its congested sight thrashes whatever feel to travel through the city is left. Especially, it is the junction that inevitably puts you down if locomotion around Whitefield has to be done. Climbing down Whitefield sounds tougher to me than climbing the Mount Everest will. And this is one of the places that have compelled me to not book hotels before a flight to catch from Bangalore airport. To look for hotels near the airport is the only option left.

K.R Puram is a junction which makes you forget the tool called accelerator as it is more about brakes. Close to many Tech Parks, the place becomes such a horror to stay in before catching your flight from Bangalore airport. Sarjapur is another realm where a good 4-5 km drive might mean 2 hours straight. The peak hours are the office hours hence covering the entire day nearly and also the time that you will be traveling in back to the airport. Classically caught, right?

And feeling like booking hotels at the periphery of the city? Well, Mekhri circle, this junction, the lifelong congestion which is a manifestation of nearly 5 lanes merging into 1.5 lanes. Jayamahal Palace traffic wedding that of Sankey Tank prepares a soup which has everything but the flow of traffic. Considering this to be the famous road to the airport is another thing which reminds me of the lack of capability to take a decision of booking a hotel even in the external premises of this city. Traffic doesn’t move but crawls in this area and whatever you preplan, getting late for your flight in this zone is a reality.

The other Places give the similar grudge. Life is difficult in a heavy traffic place. It is also joked as for why do terrorists don’t attack Bangalore; it is because they will never escape. They will definitely be stuck in traffic at one of those famous places and get themselves caught especially if they need to go to the airport, there will be no chance or plan they can ever plan.

Why a hotel near the airport?

Enough has been said regarding the horrors staying within the city can bring to your plans of reaching the airport on time. Going to the airport gives another rush feels where you rush in waiting. The real traffic begins from majestic and then you notice the vehicle you were in a few minutes before is no same anymore. It is not that there are no solutions. Yes, there are Special buses but what good they can do in this traffic. I have to go catch a cab in the end and that costs so much every single time.

I have to visit Bangalore for a few hours in which I connect with people with whom I have meetings with and then return back. I don’t feel like wasting another minute and that too in traffic. I had always wished if I can rent a budget hotel near the airport. Airports are at strange places, cut-off from the normal environment but getting budget hotels even about a few couple of miles away from the airport would also have been a terrific thing.

After all, what does a person who has to travel needs, yes, a place to sit, lie down, relax and still make at the airport on time and do not miss the flight which is in greater possibility when you are in Bangalore.

On one of the corporate meetings when I was on the way to the great Kempegowda International airport before 10 hours from my flight’s departure time, trying to utilize the time I was surfing through the internet and looked for options for hotels near the airport. I tried to use BookBySlot again. I had low expectations from the company in this city as they are new and I wasn’t expecting a pan India coverage, already.

And wow! I got a hotel room next to the airport at unbelievable discounts. Now, this was a serious savior. Killing through all the traffic and hassle I reached the hotel I had booked on hourly basis next to Kempegowda international airport. I had seen many of these hotels but how to explore them was a question which had no answer. Also, normal hotel booking platforms offered a price that put a hole in my pocket.

Since the hotel was heavily discounted, I was worried about the service. It is not to the level I am expecting, at least they are providing a stay on hour basis is a sigh of relief for a corporate like me and many other Corporate Singhs who search for budget hotels near airports, but still – will it mean a degradation in quality, by any means? Hell, no! The same awesomeness that everyone had been receiving in the name of premium hospitality is what came to my share. Hourly booking of premium hotels near Bangalore Kempegowda international airport became a thing now in my life!

I can now leave for the airport as early as I complete my meetings and can stay in the hotel near the airport. I can take a nap, freshen up, eat, watch TV and can do many other things which otherwise was all spent roaming and changing places sitting and standing. There is now no panicking in reaching the airport and wondering what to do next. For me, it is the gloomiest task to just wait and wait and now everything is past.

From then I have been booking hotels from BookBySlot and I am its one of the many happy customers. I am pretty much sure that whoever is using it will be very satisfied and happy. The hotels are cheap but have no less facility as a normal person like me needs for a few hours to be with self.

Just a few clicks on your laptop or phone and you have your room booked for the required hours. Now I can manage the hotel without wandering and searching it after reaching the place. I can have the room beforehand.

The hotels have food service, so now I don’t need to worry about having a proper diet which disrupts during traveling. What else is needed in any place where you are waiting to stay for a few hours and then go back? These budget hotels next to Bangalore international airport available for slot wise hourly booking have saved me and made me enjoy my trips without worrying for what I should do next to being under the stares of other people.

Yes, I finally have a solution for a 10-year long problem. It was not that I couldn’t have stayed in a hotel with big charges but that would have not made any sense, it would have been like wasting money. I was already wasting time being in traffic again, wasting money too would have made me feel terrible.

Everything now sets at the correct place. I travel, attend meetings, book hotel which automatically becomes a budget hotel when you book on hourly basis near the airport and then leave comfortably with a fresh and relaxed mind.

There is a gratitude for the establisher of such an idea and that there are people who understand the problems of people like us. I want to thank the makers of BookBySlot for making us lead a better corporate travel life.